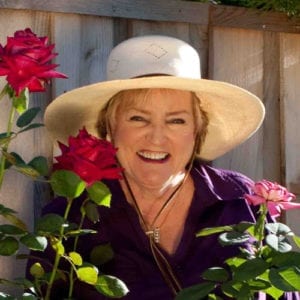 What’s the question people ask most often about how do I take care of my roses? Frankly, it’s about pruning. So I’ve put together the best and easiest tips on pruning as we approach spring pruning.

Depending on the season and upon where you live pruning time can come between the middle of January and the end of April. The idea is to do it soon enough that you will not be cutting off too much new growth, and late enough that you will not promote premature growth. Usually this is just when the buds begin to swell, and then if you do not get a late frost the bushes will be off to a great start.

Pruned late, even after new growth starts, the canes are cut to a swollen dormant bud and the bush will do just fine, I think its better to prune late rather than early. As I preach so often due to my Post-Pruning Traumatic Stress Disorder (PPTSD.) You can read all about how I developed this condition on my website.

Late-pruned bushes can bleed, but this has not been shown to be harmful to roses. Bleeding interferes with sealing cut ends but I stopped sealing smaller canes, with no increase in cane borer problems.

In addition to removing dead or diseased canes, there are several reasons for pruning. You want to remove non-productive branches and make room for ones that will make flowers. Remove crossing branches that clutter the bush or damage others. Open up the interior of the bush for ease in spraying and to promote good flowering stems. Remove non-productive canes at the base to promote growth of new vigorous canes. Finally, shape the bush so the shape looks please to you.

Before cutting out canes, you need to look at the branches they produced. If they have long, healthy, new branches, they should be left on the bush. If they have nothing but short twiggy non-blooming shoots, remove them. Sometimes there is not much left, but then perhaps the bush should be, as my mother used to say, “shovel pruned” and removed from the garden. We are told to reduce the number of canes to 3-5, but this is just a guideline.

Here are my tips:

Wear tough protective clothing such as denim with long sleeves. It won’t snag as easily as some other fabrics.

Wear thorn resistant gloves such as plastic coated garden gloves, or ones made of flexible leather.

Watch where you put your hands and forearms. Thorns can penetrate almost any fabric I’ve used in the garden. I’ve had thorns penetrate the soles of my shoes, be careful.

Invest in a small pruning or keyhole saw, they are essential for cutting larger canes and getting into tight spaces.

A fairly large cane can be cut with hand shears if the cane is bent gently away from the shears, but I prefer to use a good pair of loppers rather than wrestle with the cane.

Hold the shears so that the blunt blade is on the part to be cut off.

Cut to an outside bud on upright-growing bushes or to an inside bud on spreading type bush. Cut to a bud pointing in the direction you want the branch to grow, the top bud usually will produce the dominant shoot.

Cut to about ¼” of the bud, on a slight slant away from the bud. Cut shorter, the new shoot can break off in the wind, any longer causes unsightly dieback.

If you feel you should seal cuts, use Elmer’s glue, I usually just seal large canes.

Leave as many canes as are hearty and have space to grow without crowding and are very well shaped.

Learn to grasp the cane gently and very carefully with a slight circular motion.

If you cut or accidentally knock off a branch you meant to leave don’t let it spoil your day. New canes will grow back.

Do not prune once-blooming roses until they have bloomed, especially your large flowered climbers.

Prune miniature roses like hybrid teas and floribundas, if you have the time and patience.

Old Garden Roses (OGR) are too diverse in nature to lay down rules. If you know the variety its best to research online for the best pruning for your OGR. In general, the best rule for pruning OGRs for the first two or three years is, “Don’t.”

Susan Fox is an award winning consulting rosarian, published writer, former corporate marketing executive, national spokesperson, and creator of Gaga’s Garden, www.gagasgarden.com a gardening blog meant to educate, inform and entertain those interested in gardening. As an avid gardener and speaker to area Master Gardener groups about roses, Fox is dedicated to capturing the moment in a country rose garden to share with the world. Her passion is the perpetuation, planting & care of rose gardens. You can follow her on Twitter @gagasgarden and on Facebook

A big thank you to Susan for contributing this to our website! As Susan mentions having the right tools is a must. Check out my post on what’s in my Rose Pruning Tool Kit