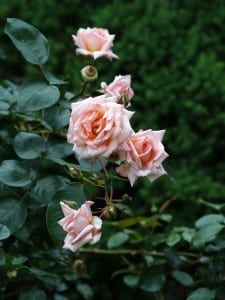 Compassion. One of the best climbing roses.

First let me say right upfront I am not a botanist or a scientist.  I am a rose nurseryperson but perhaps even more so a lover of roses.  Because of the first title anything I write here should be viewed through that prism.  Because of the second title I hope you take into account what I say here is because I am interested in any system of classification that is best for The Rose.  So when Jeri Jennings asked me to write an article on classification for the Heritage Roses Group’s Journal I was flattered and in doing so hope that perhaps I can offer a different perspective to rose classification.

Let’s begin with the simple question, how does a rose get its classification?  When a new rose is hybridized someone registers it with the International Registration Authority for Roses (IRAR).  Currently the American Rose Society serves as the IRAR.  The person who registers the rose is usually the breeder, but sometimes it can be the nursery of introduction acting on the breeder’s behalf.  It is that person who determines what class (Alba, Hybrid Musk, Floribunda etc) the rose will fall into.

How does that person determine the class?  Most often by its parentage:  If a rose is the result of a cross from two China roses, then the rose is classed as a China and so on.  Sometimes it might be by growth habit:  Many roses have such complicated parentage in their backgrounds they don’t always come “true” to their parentage.  Kind of like the redhead in a family of brunettes.  And sometimes if the registrar isn’t sure, they may for commercial reasons register it in a class that is currently selling well.  Many a rose ended up as a Hybrid Tea that way.

By now you get the point there isn’t really a formally “structured” way of doing this.  Unlike Linneaus, who looked for order in the plant kingdom, in my opinion the current method of rose classification is loose system that does not serve the rose community or roses well.

I feel the rose classification system while important for the work of botanists, is also important for the rose lover.  Rose lovers would like a simple system whereby the rose’s class gives them an idea of how the rose will grow in their garden.  If a rose is classed as a Hybrid Wichurana it should have lax rambling canes.  A Gallica should flower in spring and be upright, a Portland shouldn’t get overly tall and a Shrub should be just that – a shrub.  To me the first criteria for classing a rose should be growth habit regardless of parentage.

There is historical evidence for this argument and it comes right from the IRAR.  Let’s look at the history of La France the rose many consider to be the first Hybrid Tea.  Most evidence points to it being a seedling of Mme. Falcot – a Tea Rose.  So why not classify it as a Tea?  Well simply because it was something new and therefore a new class was introduced – The Hybrid Tea.  Other classes such as Floribunda, Polyantha and the newer class Mini Flora were all created to accommodate roses that simply did not belong to any other group because of their growth habit – be it flower, size or both.

This system works fine as along as it’s consistent.   Sadly it no longer is and the Old Roses in particular have been the victims.  Consider that in 1993 the IRAR recognized approximately 31 classes pertaining to old roses and by 2000 it was down to 22.  So what’s missing and do they really matter?  Many think they do.
For example China and Hybrid China, Bourbon and Hybrid Bourbon were up till recently separate classes.  Then they were merged into Hybrid China and Hybrid Bourbon respectively.  Some argued they were all Hybrids because they were all crossed with other roses.  But they are not at all similar if you examine how they perform in the garden.
Hybrid Chinas and Hybrid Bourbons are the result of crosses between Chinas or Bourbons with spring flowering European Roses.  The results are roses that while they might have a longer spring flush than a Gallica, do not for the most part repeat flower.  That is a very different rose from a China that during the season is constantly in flower, or repeat flowering Bourbons that at minimum also bring forth a wonderful fall bloom as well as spring.  In addition many Hybrid Chinas are tall growers – again completely different from the smaller Chinas.

Add to this confusion the Noisette class which is a complete mess.  The Noisettes at their birth in Charleston were shrub-like in habit and bloomed mostly in shades of white and pink.  Then they were crossed with Climbing Tea roses and the result is a group of roses that are distinctly climbers and come in shades of white to yellow to apricot.  They are very different from the first Noisettes and the “nickname” given them is “Tea-Noisette”.  Many feel they are a distinctly different class and should be separated as such but up to now they all remain Noisettes.  Not much comfort to the person who buys the Noisette Mary Washington to cover their arbor and finds it only grows four feet high.

So where do these roses go when their class is no longer officially used?  Some, like the before mentioned Bourbon and China groups, are simply merged.  However some are simply lumped into the Shrub class and because of this the Shrub class is one that doesn’t mean anything anymore.  The most extreme example of this is the rose “Montecito” which for many years was a Hybrid Gigantea until that class was dropped and it was dumped in the shrub class.  The problem is Montecito grows up trees and easily reaches fifty feet in height.  Hardly a shrub.

The good news is there is an attempt under way to sort this out.  The Classification Committee is working through the roses and taking input to attempt to come up with a cohesive system.  The balancing act faced by this hardworking group is to avoid ending up with so many different classes as to be unwieldy, but to have enough classes to bring order to the system.  But this will take time as there are as many opinions as there are roses.  But if they use growth habit as their primary guide a logical system will emerge.  After all, it seems the roses themselves should have the final say.

Afterward
If you want to see more information on the classes I mention above check out Brent Dickerson’s books, groups like the Heritage Rose Group and the Heritage Rose Foundation and The Vintage Gardens Book of Roses.  The last one is written by Gregg Lowery and Phillip Robinson who in addition to being two of the finest rose scholars we have, grow and live with the roses they write about.